A typical Sandhill Crane hunt with Galloway Bay Outfitters is a species-specific hunt that uses top-of-the-line sandhill crane decoys to target Sandhill Cranes. Crane hunts are included in all of our all-inclusive hunting packages at no additional charge. They provide a great morning or afternoon hunting opportunity, especially earlier in the season when their numbers are abundant, and hunting regulations do not permit the hunting of dark geese in the afternoon (before October 15). A targeted crane hunt does not necessarily allow for a mixed-bag hunt, as the decoy spread and scouted region are specific to the cranes but can offer a very thrilling and unique waterfowl hunting experience! Occasionally, a morning hunt will provide the opportunity to hunt both geese and cranes. 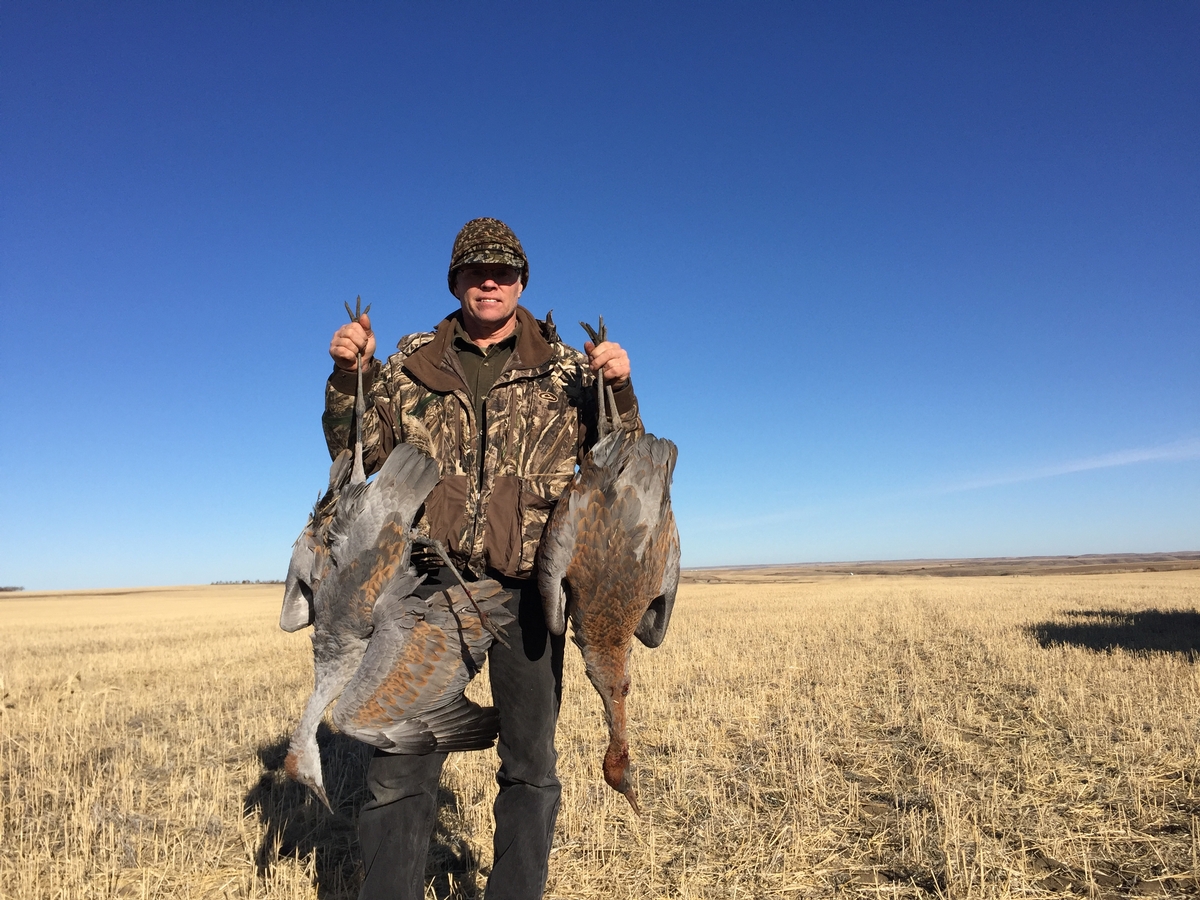 Cranes are an incredibly fun bird to hunt. They are a challenge to call in but provide a very rewarding experience when you witness their large wingspans descending down on the field in large, swooping circular patterns. A professionally trained guide will retrieve the downed birds as occasionally the injured bird will put up quite a fight. We do not recommend bringing your hunting dog on a crane hunt, due to the risks posed for injury to the dogs from injured cranes, as they can be quite vicious.

The sandhill crane itself is a large, long-legged wading bird that can stand up to 1 meter tall and has a wing-span of up to two meters. Adult birds have grey plumage with long feathers that extend over the tail. They have a characteristic red forehead, with a long, strong and sharp beak. Their lifespan is 20-30 years in the wild. They are largely monogamous and usually pair with a lifetime mate when they are between 2 and 7 years old. Females usually lay 2 eggs, however usually only 1 egg hatches. Both parents are responsible for feeding the young.

Cranes are typically most abundant in the last few weeks of September and the early part of October. They prefer warmer weather, therefore at the first sign of winter, they start their migration south. They provide a great morning or afternoon hunt but must be targeted specifically (i.e. not in a mixed bag hunt). If you are interested in a crane hunt, please let us know when booking your hunt to allow us to provide you with the best times/opportunities for crane hunts!

The daily limit of cranes is 5. The possession limit is 15/person.

The Galloway and Miry bay regions are renowned for their Sandhill Crane hunting opportunities. These regions record significantly large numbers of annual Sandhill Crane migrations, with upwards of 80,000 individuals visiting these regions each year.

The sandhill crane is the most numerous crane species in the world, with a large range that extends across Canada and the United States. Their population is considered to be in the several hundred thousand (~700,000). They reside in Canada during the spring, summer, and fall months, and migrate south for the winter. The population size of the Sandhill cranes is considered to be increasing in recent years, which is good news for the avid crane hunter.

Sandhill cranes are omnivorous, opportunistic feeders. They will eat whatever is available, including insects, aquatic plants, grains, seeds, rodents, snakes, and small birds. They rely on wetlands such as marshes and bogs extensively for all parts of their lifecycle. They tend to prefer isolated habitats that have access to tall vegetation for hiding. All Canadian Sandhill Cranes are migratory. Each year in the spring, the Sandhill Cranes migrate to breeding grounds in Canada, by following traditional migration flyways. They then reside in Canada during the spring, summer, and fall months. The young are ready to fly south to the United States or Mexico soon after their first flight.

You will often hear hunters call Sandhill Cranes the “Ribeye of the Sky.” They are considered to be quite a tender bird to eat if cooked properly. Here is a very popular crane recipe that we enjoy on a frequent basis during the hunting season: